Methodology
015/a – use this subfield as the basis for determining that a record originated in the BNB. Under the terms of CUL’s existing (but by now rather ancient) OCLC agreement, BNB records obtained from OCLC are covered by our BL user licence, and OCLC claims no rights in them. (This issue isn’t covered in the new WorldCat Rights and Responsibilities document.)
035/a – use this subfield as the general basis for determining the source(s) of a record (not necessarily the immediate source, though).
038/a – use this subfield to determine the record content licensor of a record.
As a rule of thumb, we can assume that the 015/a trumps what’s found in an 035 field – so it shouldn’t matter what the immediate source of a BNB record is, as the rights for that record remain with the BL. Similarly, the 038/a trumps any 035, since it’s an explicit statement concerning the identity of the licensor.
One complication here is that there is no access to the 038 in the Voyager tables, so identifying records containing that field is a rather long-winded process. For any initial data analysis we might want to ignore it and rely instead on the other identifiers (simply because it saves time and avoids the need for any scripting).
Without getting bogged down in the niceties of legal language, we should be able to assert the following:
All records with a BNB number in the 015/a belong to the BL
All records with an 038 belong to the licensor in the sub field a (but we might skip this stage initially – see above)
Of the remainder:
Each 035/a identifies an entity with some interest in the record – we should concern ourselves only with those identified above in the section on “Sources of data” (ignoring, therefore, entities such as the RLUK member who contributed a record to the RLUK database, from which it was then downloaded)
Various approaches could be adopted – what follows is just one (very simple) route, designed to help in the generation of ballpark statistics.
Initially, for the BNB records:
SELECT BIB_INDEX.BIB_ID
FROM BIB_INDEX INNER JOIN BIB_MASTER ON BIB_INDEX.BIB_ID = BIB_MASTER.BIB_ID
WHERE (((BIB_INDEX.INDEX_CODE)="015A") AND ((BIB_INDEX.NORMAL_HEADING) Like "GB*") AND ((BIB_MASTER.SUPPRESS_IN_OPAC)="N"))
GROUP BY BIB_INDEX.BIB_ID;
(NB: this is a little crude, in that there are a handful – and no more – of non-BNB records that start with “GB”)
And then for the 035/a (this example identifies only the RLUK identifier – it will need extending to cover the other data sources):
SELECT BIB_INDEX.BIB_ID
FROM BIB_INDEX INNER JOIN BIB_MASTER ON BIB_INDEX.BIB_ID = BIB_MASTER.BIB_ID
WHERE (((BIB_INDEX.INDEX_CODE)="0350") AND ((BIB_INDEX.NORMAL_HEADING) Like "UKLCURL*") AND ((BIB_MASTER.SUPPRESS_IN_OPAC)="N"))
GROUP BY BIB_INDEX.BIB_ID;
Those in the latter set that are also in the former can be disregarded (this could be JOINed into the query, of course, or both made into MAKE TABLE queries and the filtering done as a follow-on stage).
At a later stage this could doubtless be scripted, not only to include consideration of the 038, but also to reduce the number of stages involved and to end up with more exact results.

Update - a proposed workflow for a script based on this methodology is contained below. A sample Perl script is available at data.lib.cam.ac.uk 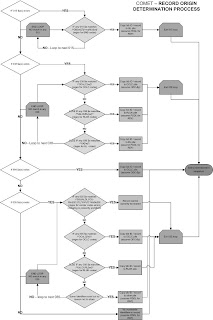 Email ThisBlogThis!Share to TwitterShare to FacebookShare to Pinterest
Home
Subscribe to: Posts (Atom)
This project runs from February until July 2011. Our tag is #CULComet

This work is licenced under a Creative Commons Licence.